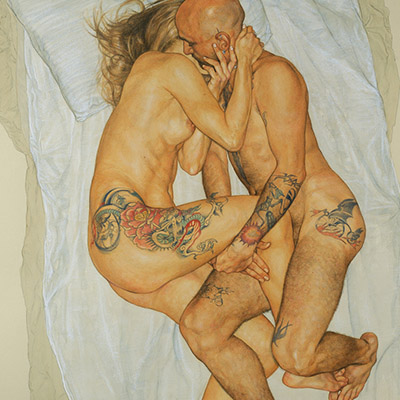 Riccardo Mannelli, cartoonist and illustrator, was born in Pistoia (1955) and lives in Rome since 1977.
The protagonist of the major European satirical journals since 1975, some of which directs or participates in the foundation (Evil, Boxer, The Heart). Riccardo Mannelli, has partnered with comic magazines such as Linus and Alter Linus, and built reports designed for L’Europeo, La Stampa, Il Messaggero and Il Manifesto. He works for The Republic and The Daily and other newspapers, including foreign companies.
He had also developed a personal artistic research, documented in numerous exhibitions and catalogs, among whose outcomes: the pictorial cycle of sixty works Comedy in Z.E.R.O .; the virtual altar frieze projected Pacis Apotheosis of corrupt, that gave birth to the eponymous illustrated book; with Jan Saudek Tender Barbarians. In 2011 he was invited to the 54th Venice Biennale, Italian Pavilion and in the context of the shows d ‘Art at the 54 Festival Dei Due Mondi in Spoleto.
Riccardo Mannelli, teaches at the European Institute of Design where he coordinates the illustration department.

This site uses Akismet to reduce spam. Learn how your comment data is processed.