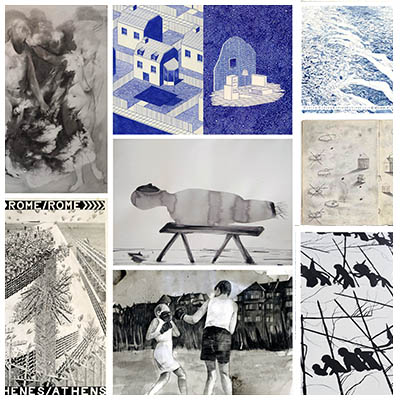 Maisons Perdues is an exhibition created and organized by the festival itself, a collective exhibition of contemporary artists whose peculiarity lies in the art of drawing.
Home means protection, safety, memory and remembrance, home is the foundation on which we build our existence as individuals. When this concept, native to mankind since the end of nomadism, is put at risk by catastrophes or other events that are out of human control, what’s really jeopardized, deep down, is the concept of identity. Maybe because the house walls are limits, boundaries that separate the outer from the inner, the hidden world from the nakedness of our existence. Rethinking one’s life is something the modern man has progressively got out of the habit to do, but both big and relatively little upheavals, natural and historical, brutally slam it back on page one of our lives. The fear and ignorance towards the figure of the migrant, for instance, finds one of its most violent expressions in the motto “let’s help them in their homelands”, a clear summary of the gangrenous, lost capacity to empathize with the act of surrender made by individuals who, coerced or not, must abandon the feeling of security given by a home, and experience, maybe, the fear of a body projected towards a space of infinite possibilities, created by the lack of physical or identity “walls”, serving as containing, defining limits.