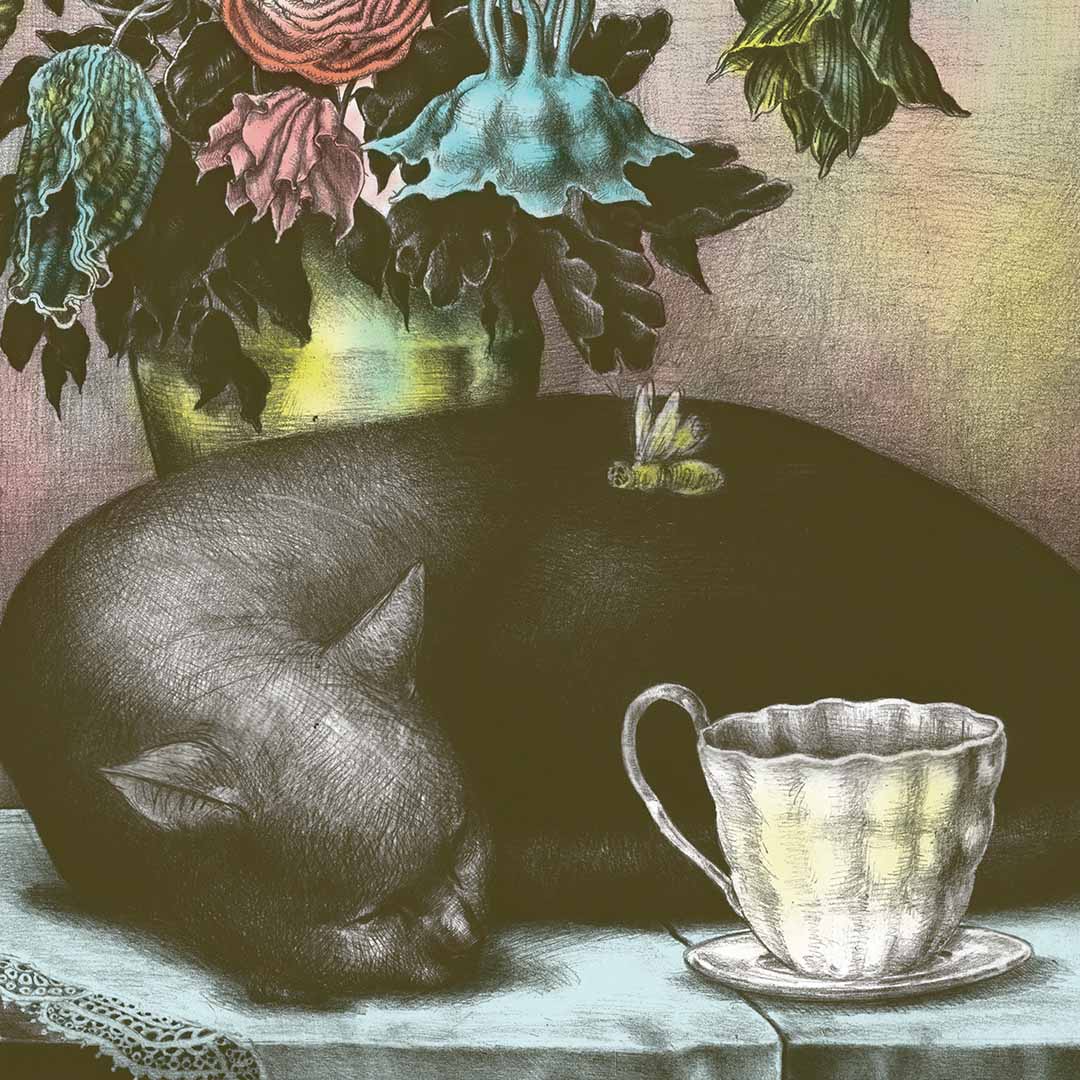 The Autodafé exhibition is born from the need to bring together artists who come from different places in the world, and have them come together in a hypothetical procession of donkeys, people who platonically “know not to know” and for this reason want to “know themselves”, and with themselves know each other.

Autodafé. Act of faith, one of the most impressive juridical ceremonies put together by the Spanish inquisition, in which sentenced people, carried in procession with headscarves in the shape of donkey heads, were flogged and asked to repent of their sins, not to be burnt alive.

A reflection, through shame and pain, on one’s own identity and on what sin is, presumed or real, embodied in our own person.

Let’s now remove all references to religion, let’s take away from sin the sense of disobedience to any god, let’s remove all punishment, moral or physical, pain or guilt.

The act of faith that remains is the one each of us, men, should offer to humanity: the act of faith by man to his fellow man, through the reflexion on one’s past and present mistakes, in which our identity, mix of experience, culture of belonging, historical genetics, comes into collision and painful friction with other identities. With self-criticism, yes, but also with self-irony.

East against West, rich against poor, north against south, man against woman, white against black, x against y.

In one of the many central historic moments in which bewilderment and superstition, moral and morality, sacred individual principles and induced totalitarianism are changing and modifying our perception of the world and consequently our relationship, with an increasingly lonely otherness, the role of the artist, of the cultured man, of the intellectual or simply of those who think and feel, is perhaps to create a dialogue through an “act of faith”, a formal request for excuses, a step towards the other, for the society that the individual belongs to, in a way or another.

Marco Wagner (*1982) studied design at the University of Applied Sciences in Würzburg, Germany
with a focus on book illustration and is working as an artist and illustrator since 2006. In his art he is facing the fears and discomfort from his childhood, while the main focus is on people ́s vulnerability in an assumed protective environment. Religion, nature and tradition represent the biggest threat for figures in his works, though they flaunt their wounds with strange pride.

Nicolas Zouliamis was born and raised in Bruxelles. He first studied illustration and comics at École de Recherche Graphique (ERG) and then screenwriting at the Université libre de Bruxelles (ULB). In 2009 he wrote a feature film, directed by Luc Dardenne, as an account of his accomplished studies. Also, in 2009 he published his first comic book “La volupté d’hectopascal” for the publishing house “Cinquième Couche”. Later, he has been working as illustrator, storyboarder and comic book artist and has published several stories, especially for the Latvian anthology KUS Comics. Nicolas has been living in Paris since 2013, where he still works as illustrator and works together with magazines such as XXL, éditions du Soleil, Acte sud etc… In April 2016 he opened his solo exhibition “Perpetuum Mobile” at “Le MAGA” gallery, Bruxelles. In this occasion he published the silkscreen book “ La mort du chien” (Bichel éditions). He currently works on projects addressed to children.

Ufficio Misteri is a three-illustrator artist collective, based in Bologna at Via Andrea Costa 77. Marco Bassi, Daniele Castellano, Bruno Zocca conceive and create images for customers in the artistic and publishing industry, using the drawing as a tool to experiment its supernatural possibilities with the aim of intertwining their signs and visual worlds.

The exhibition is the result of the project of buying and selling memories, which started a year ago: a service that allows whoever to forget some events of their own past, gaining also a little spare change. Looking into the memories offered by the public, Ufficio Misteri has identified some intriguing similarities among several cases: the past of three people was haunted by feline sinister presences, evoked by a common guilt and a trauma dating back to childhood. In order to investigate thoroughly in the memory of these people, Ufficio Misteri has called upon the ghostwriter Marco Taddei, whose help played a key role in the resolution of the case.

I am Mohammad Barrangi Fashtam.I am an illustrator and printmaker. I was born at Rasht, a northern city of Iran. It is about 9 years that I constantly illustrate for book and participate in different festivals. In this context, I try to professionally pursue my passion in life. I personally inspired by East. The place that I was born in it. By the elements that I have seen and engage since my childhood.

Oriental art has been reflected in my art with contemporary vision. The synchronization that is a feature of Iranian painting and the simplification in form and color along with motifs of this culture, are reflected in my art works. I create the ingenuity of elimination by reducing the number of colors to minimum. The colors used in my artworks are inspired by old tiles and Persian rugs. Showing this relationship is by modifying the components without changing their nature. I try to illustrate the symbols and signs coming from Iranian believes and eastern people. The symbols that might common in other cultures and tribes` believes. This images comes from my memories. Walking in Old Street of the city that I was born in it. The symbols and signs that are in above the doors combining with religious and art. I express my thought on the spirit of contemporary life by the characteristic of each person that turns to the animal. Their spirit empowered on them like the leadership and the potential impact of their life which shows how each person is going to engage with it. It delightful for me to take viewer to a long journey in east, Iran. Because I believe the people of other countries might not have the opportunity to travel and see other countries. So I create images coming from my soul and feeling showing a part of my land. The types are something such as poetry for me. My imagination about the eastern is so much powerful that each artist can create his or her personal style regarding their personal experiences. showing this mood that i currently living in it, motivates visitors to have a new look into the east.

• Luca Poncetta
Born in Italy in 1980. Currently living in Bologna and working in theatre, visual and performing arts. I worked as a creative consultant for visual and dramaturgic aspects of projects that have been hosted in various national and international festivals: Queer Festival (New York, US), Fringe Festival (Edinburgh, UK), The World as a Place of Truth (Wroclaw, Poland), Together Apart (Hamburg, Germany), Romaeuropa Festival (Roma, I), Santarcangelo International Festival (Santarcangelo, I).

Insu Lee is a visual artist who lives and works in Seoul and New York. He earned a BFA in Visual Design at Hongik University in Seoul and a MFA in Illustration at School of Visual Arts in New York.He has completed multiple projects with a wide range of clients as an illustrator, and his work has been awarded by American Illustration, Creative Quarterly, AOI World Illustration, and 3X3 International Illustration. His works have also displayed many times in various galleries in USA, Asia, and Europe.

My work represents the combining together of diametric forces, fusing to accomplish a harmonious existence of human nature and conflicting ideologies.

Serena Zanardi was born in 1978 in Genoa, where she currently lives and works. Following her graduation at the Academy of Fine Arts of Carrara, she attended a course to specialise in languages and technologies of the contemporary photography project at the CPFR Bauer, Milan. In 2013 she won the San Fedele award. She has taken part into exhibitions and artist-in-residence programs both in Italy and abroad: Icaf, Sasama (Japan), Bocs Cosenza, CAIR Ceramic Artist Residence (Neümunster), FRAC Corse (Ajaccio), Albisola artisti cercasi…

I must have been five, six years old and, one day, my grandpa showed to me a dead mole, hit by the hoe. He laid the little animal on a table and tried to “teach” me that it was nogood for the garden so it should be killed. I looked for some scraps of cloth to set up a crib, where I placed the animal. I thought that in this way the mole could have “recovered” from death. I didn’t know back then that death exists and that the animal is blind by nature. Many moles represent my act of faith, a stimulus to think about prejudices, about what we did wrong and what we are doing wrong.