Search
On Posted on April 18, 2017 by elena starnoni to Streetart 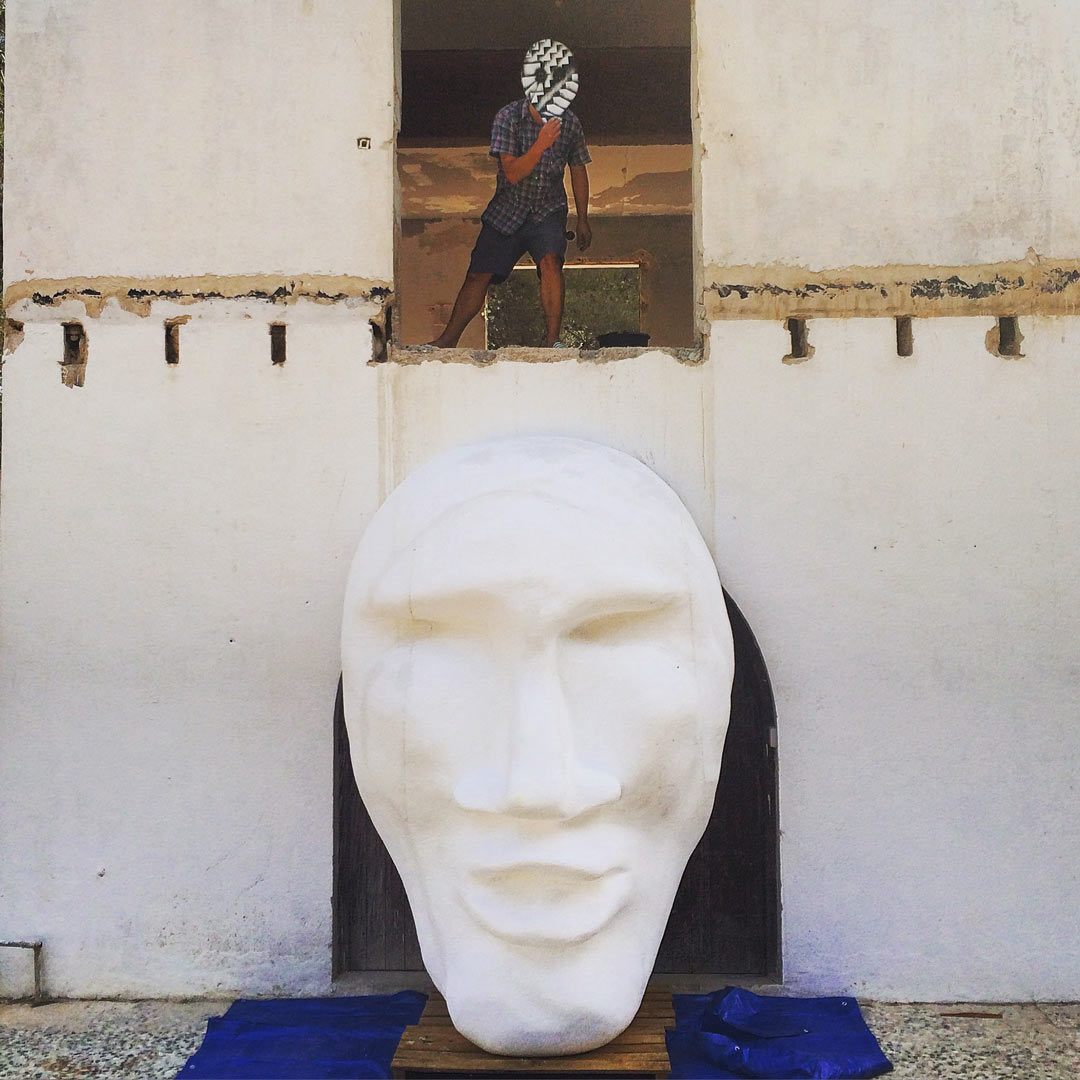 Giacomo Bufarini, whose pseudonym is Run, was born in Ancona in 1979 but has lived and worked in London since 2007. He is mostly self-educated: after completing the artistic high school, he became interested in the underground scenery, initially with graffiti and then with street art.
He approached the mural scene by painting community centres and deserted houses, fascinated by the possibility of expressing himself in a public space and by the freedom offered by the street. The two Italian cities with most of his works are Florence and Bologna, where the artist has painted his first murals. He started to paint graffiti on lorries, trains and walls when he was young and created his first mural in 2003. His inspiration comes from freedom, originality and quality. The name RUN comes from a song from Cypress Hill. For him, choosing a name is like getting a tattoo when you’re young: it doesn’t necessarily have a deep meaning but it remains on your skin forever. Run has become famous very fast in the Italian underground scenery. He and his collaborators gradually attracted the European street art movement, influencing the rebirth of the European art of murals. His artistic path is characterised by a deep research on the line, which led Bufarini to delve into the wood carving techniques, painting and illustration, printing and engraving. His art can be found in many different countries, including Italy, England, Poland, China, Switzerland, Morocco, Senegal, Russia and Albania. His unique style is easily recognisable and it shows a level of attention to detail and an incomparable complexity that is hard to find in contemporary street art. His representations are often emphasised by the symbolic entanglement of bodies, and pattern like, friezes in bright, arresting colours. Giacomo Bufarini (aka RUN) is interested in street art as a language of communication, creating playful characters that speak to diverse audiences on multiple levels. The expansive scale of his works captivates the viewer, affecting a renaissance of muralism that reaches beyond the boundaries of street art. In May 2013, RUN exhibited his works at the Festival of Dulwich. His first solo exhibition (“Parabola Di G”) was held at the Howard Griffin Gallery in London from November 2014 until the beginning of February 2015. “Parabola Di G” is a semi-autobiographical story told through a unique series of highly detailed pen and ink drawings that collectively make up a book. The imagery follows the journey of a semi-fictional character, G, as he falls through levels of reality into a dreamscape. In September 2014, RUN opened his second solo show entitled ‘Man is God’ at Howard Griffin Gallery, Los Angeles. He participated in many Public Art projects, including a 2013 mural painted at the Village Underground wall in Shoreditch, London. Along with the Mexican artist Pablo Delgado, he painted a mural in the London’s neighbourhood of Clapton. In February 2014, RUN teamed up with Sheffield-based artist Phlegm and Christiaan Nagel on a mission to give final moments of vivacious life to yet another to be demolished building in London – the Blithehale Medical Centre in Bethnal Green. His latest projects include THE ARTMOSSPHERE Art Biennale in Moscow and the project MB6 for the Art Biennale in Marrakech, where he was asked to create a 6400 square metres painting in the main square of the city Essaouira. In 2015 he launched his last project in Rome, on his return to Italy: “L’Uomo con la Coda alla galleria Varsi”.
In November 2016 he published his first monographical book “Time Traveller Artist Man (unicorn press UK 2016).

What’s the story behind the name RUN?

RUN ‘s tag has been inspired by a Cypress Hill song, from the name of the dog of an Italian Mutoides friend (GRUNE), from the sound of these three letters with no meaning added. When you are young and you choose a tag, it doesn’t usually have the deepest meaning ever. It is like if you get a tattoo when you are 16 or 18 then ten year later it is just a mark on you, but it stays on your skin forever.

When and where did you create your first street art? What was it?

I used to graff when I was very little on trains, lorries, walls. Then I started to create paintings out of Hip Hop, using matt emulsion, water-based colour, rolls and brushes. My first big wall was in 2003 while squatting in a building in Italy. The meaning of that painting was: “We are here now and we haven’t got fear of nobody!”

You’ve just finished painting a big, colourful wall at The Foundry. Talk us through the ideas behind this piece.

Wall at Foundry: I had to adapt my design to what was already on the wall before (a recent colourful style by Milo Tchais), so I developed some shapes (hands) which I’m quite confident to make. Then I added some characters. The characters are wearing those hands like fancy dress costumes. It is March and we are in carnival period, isn’t it ?

Most of your work is large-scale. What challenges does this present? Does it mean sticking to mostly legal walls?

Big is better I think, especially in an era when the mass communication from corporate advertisements are so massive everywhere. Tags and wall writing graffiti are almost invisible in a busy visual environment. We should create contrast. If the background is gray, let’s use as much colour as we can! I am not really interested anymore in the adrenaline rush of painting illegally. If a wall is legal, it is more than okay. It’s already revolutionary and political to paint public spaces. I’m still going illegal if I need to though.

We remember some of your profile-style faces in Hackney a few years ago. Your work seems to be more detailed and complex lately. Is this your style evolving naturally or has it been a conscious change?

Once I moved to London, my drawings were constantly changing. This depends on the circumstances. I had to be quick (especially if I painted in the day time on a busy road ), so I had to make simple shapes and no outline, but if I have the time and opportunity, I like to go complex. Sadly (for me) most of the people in London have a “street logo”, so I had to get one (the faces), but I still try to make each painting with something new and different.

You’ve collaborated with artists like OZMO and M-City in the past. Is there a particular London-based artist you’d like to work with in the future? Why?

I am always up to collaborate in a wall but it has to be interaction between the two parts otherwise there’s no fun. And when I meet an artist, I’m not afraid to ask …

You’ve painted all over the world from your native Italy to China to Albania and many more places. What are your best and worst memories as a street artist abroad?

Let’s just say that I paint because I want to travel. There’s no better thing than to see another country and culture and possibly work during the trip. If I can keep my travel wheel spinning that’s enough for me to be happy.

If you could choose any London wall to redecorate, where would you take your paints and what would you create?

There are such a lots of walls in East London that I’d like to paint – blind facade (facade without windows) that are there just for be painted. The anti-graffiti policy in London is totally without sense. Maybe somebody can do something for that. I am doing what I can from my point of view that you “legalise” graffiti and murals in more spots that could only bring better thoughts to the people.

We’ve seen a few similarities between your work the art of BLU. Which other street artists give you inspiration?

I am inspired by freedom, originality and quality. I’ve meet many good artists on my way and I’m lucky to have grown up with many good people around. I know London keeps your mind very busy, but there are many other places and artists to discover around Europe and the rest of the planet.

Why is street art important? What do you hope to accomplish or communicate through creating your art in public spaces?

It is simply a way to communicate, but is free. Nobody is going to tell me what to draw on the street. And I got the proof in my experiences that people are just happy to see that happen. If they are not that means that they’re pissed off on their own.